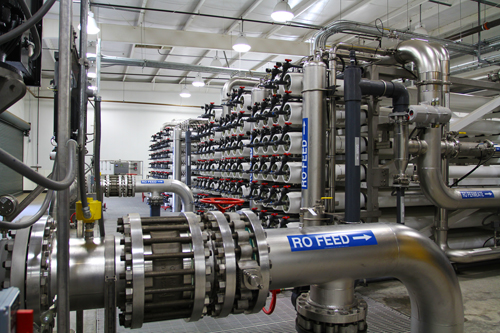 The expansion of the Chino Desalter in Jurupa Valley will more than double the existing facility’s production capacity from 10 million gallons per day (MGD) to 20.5 MGD when it fully comes online in early 2017. The plant is expected to initially come online summer 2016, and produce around 15 MGD.

The project has been in the works since 2008 and is a collaborative, multi-agency project between Western, Inland Empire Utilities Agency, Jurupa Community Services District, Santa Ana River Water Company and the cities of Chino, Chino Hills, Norco and Ontario.

In June 2016, a state-of-the-art reverse osmosis efficiency project opened at the site, which was a major milestone in the expansion’s progress. The efficiency project helps increase water recovery from 80 to 95 percent and decrease brine waste by nearly 70 percent, ultimately increase drinking water output by 2.2 MGD.

Several other components of the expansion are still in the works, including expanding raw water well fields, installing a raw water pipeline and adding additional drinking water delivery facilities.

The expansion project is multi-year, multi-agency, multi-million-dollar effort to increase locally sourced water for the region. More than $77 million in grant funding has been obtained for the $144 million project.

Desalters work by using reverse osmosis technology to remove salts and and other matter that must be taken out of the water before we can drink it.