Coronavirus Update We have suspended water shutoffs and penalty fees until June 30. Our lobby is closed to the public. Learn more

We Can Solve it Without a Drinking Water Tax 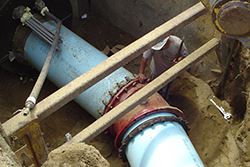 End-Of-Session Update: After widespread support by both houses, AB 2050 passed out of the Legislature on Monday, August 28, 2018. This legislation, co-sponsored by Eastern Municipal Water District (EMWD), now awaits the signature of Gov. Jerry Brown. Gov. Brown is anticipated to take action on the bill in the coming weeks.

Western Municipal Water District (WMWD) believes that failing systems need a sustainable approach to operate safely and responsibly, and WITHOUT the need for a water tax. AB 2050 can help provide all Californians with access to safe and reliable drinking water, now and into the future.

In an effort to propose a long-term method for providing all Californians with clean water, EMWD and the California Municipal Utilities Association have co-sponsored AB 2050, the Small System Water Authority Act of 2018. AB 2050 proposes to merge multiple, non-compliant water systems—that are close in general proximity but don’t have to share boundaries—into larger and more robust systems that can operate together for lower cost overall. The newly formed special district would then have better financing opportunities due to a larger customer base, with increased access to state grants and municipal bonds or other funding mechanisms which are historically used by larger public agencies. These newly created special districts would also be held to public agency accountability standards, which would ensure funds are used appropriately to develop necessary infrastructure to treat contamination issues so that safe and affordable water is delivered to customers.

View the AB 2050 Legislative Fact Sheet to learn more about this piece of legislation and review the long list of supporters.

End-Of-Session Update: The effort to impose a "voluntary" water tax on ratepayers died in the Legislature on Friday, August 31, 2018. Assembly Speaker Anthony Rendon said “a piecemeal funding approach” to the problem “won’t work.”

While most Californians have access to safe and reliable drinking water, there are still more than 300 water systems in the state that are non-compliant and fail to deliver water that meets public health standards. A vast majority of these systems are located throughout the Central Valley, and are privately owned and in rural, disadvantaged communities.

While WMWD supports every Californian having access to a clean and reliable water supply, WMWD also believes that a solution should address the root cause of the failing systems before determining any type of funding mechanism. The root cause is often a lack of technical, managerial, and/or financial experience—which Senate Bill 623 (SB 623) and the previously proposed Budget Trailer Bill both failed to address.

SB 623, which was modified into an unsuccessful Budget Trailer Bill, has now been transformed into Senate Bill 845 (SB 845).

SB 845—opposed by more than 200 public water agencies, water associations and business organizations—seeks to collect funds from public water system ratepayers to fund system improvements for non-compliant systems in other parts of the state.

More than 3,000 public water agencies will be forced to collect a “Voluntary Donation” and send your ratepayer dollars to Sacramento.

For WMWD customers, this “Voluntary Donation” will be a line-item of approximately $1 added to your current water bill. Disguised as a “Voluntary Donation,” ratepayers will be required by the State to personally opt-out to avoid paying this water tax.